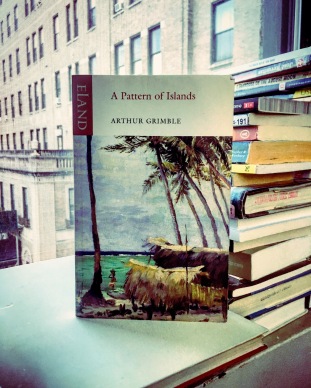 After reviewing the worst book of all times set in #tarawa #kiribatiI’m happy to share an immensely better book set in the same location. It’s difficult not to read the stories of a UK #colonialofficial from the 1950s with some sort of trepidation. But #grimble ‘s account will captivate and entice you from the very first pages. The #armchair traveler in me was in dreamland with this book. #arthurgrimbledoes not mince words when it comes to describing the intricacies of both the local cultures and the brutalities and absurdities of the #british colonial system. #apatternofislands is much more than an attempt to categorize and box other peoples cultures and traditions in stereotypes and unknown/misunderstood experiments. This book is the personal account of someone who went through a dramatic transformation and came back a new person or maybe the person he never thought he could be. It reminded me of #georgeorwell ‘s account of his time in colonial Burma. Grimble learns the local languages, submerges himself in local customs and learns the ancient wisdom of the people living in the islands and their mystical connection with the ocean. This timeless and rich #memoir is one I can’t recommend highly enough to anyone interested either in the region or just some historical #travelwriting . #eland#elandpublishing #gilbertislands#britishcivilservant #gilbertandelliceislands#taetaenikiribati #gilbertese #kiribatese#magistrate