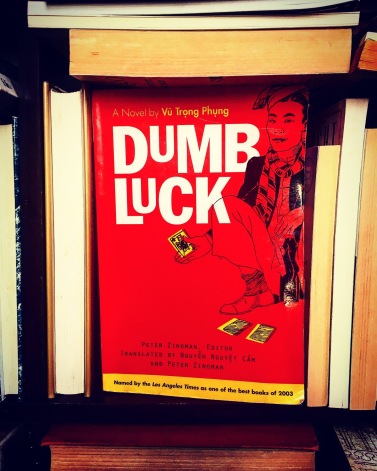 Wow! And now for the potential #bestbookofthemonth ! Controlled chaos: the idea that a writer can perfectly craft and orchestrate seemingly disorganized and random occurrences with a heavy dose of characters in order to send a message. In my humble opinion, this controlled #chaos is what differentiates writers from amateurs. Outlandish twist after another, nameless characters after another ones are just the tip of the universe which #vutrongphung has masterfully created. You can’t but fall victim to his spellbound writing. As much as #redhairedxuan , Vu Trong Phung wastes no time to seize his observations and gift us a timeless book. #dumbluckis timeless because by writing as extensively and deeply as possible about the French-occupied, #indochine #tonkin, he manages to write an unequivocally human story. The power to use local and specifically historical (current to his 1930s #hanoi ) elements to produce a universal story is also what distinguishes writers from amateurs. What country hasn’t fell prey of the hypnotic voices of demagogues and empty and loud promises? My next book review will pick up #vietnam where Dumb Lick leaves us… Despite the fact that Dumb Luck was published in the 1930s, it was banned in Vietnam until the 1980s. So these two books talking to each other makes complete sense. Stay tuned! #highlyrecommended#universityofmichiganpress#vietnameseliterature #frenchcolony#controlledchaos #satire #politicalsatire#socialcritique #banned #vichy#rapidtransformation