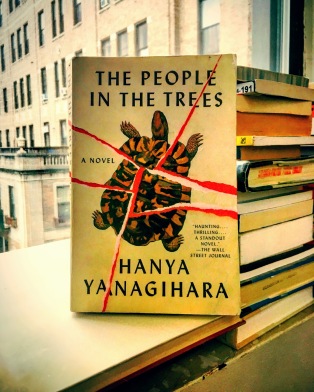 I found the beginning and the final chapters enticing and fascinating. I believe these are also the two parts which have drawn much attention and even criticism towards this book. #yanagiharagoes deep into the mind of someone convinced of his own utterly benevolence and without much or any remorse at all. The topic is by no accounts one easy to read and Yanagihara’s writing is powerful and incendiary. But I’d also argue that #hanyayanagihara should have gone even deeper into this man’s rationale and potential ways in which he explains the root causes of his own behavior. Without a doubt shedding some light on his childhood and his parents’ influence were the scenes I will remember the most. However #thepeopleinthetrees also spends a significant amount of time explaining the travails and adventures of an experiment gone wrong and how academics are simply conditioned to study one tiny thing without considering the impacts on real lives. This part was interesting in an #anthropologicaland #indianajones kind of way. However I just don’t think this middle part connected the story as a whole or even linked it to its most #controversial parts. Overall it’s still quite the ride and one I’d recommend to read and to challenge yourself when it comes to identifying yourself with a character. #debutnovel #ivuivu #adopted#experimentgonewrong #losttribe#fountainofyouth #immortality#imaginaryisland #Gajdusek#recommended #turtles #doubleday#ethicalquestions #unreliablenarrator